Diane Carr is a reader in Media and Cultural Studies at University College London (UCL’s) Institute of Education, where she teaches courses including ‘Digital Games and Play’. For the D4D project Carr has been leading the work-stream Playful Bodies, Technology and Community. Natasha Sutton Williams spoke to Carr about her work with videogames and players, and collaborations with Esther Fox and DAO. 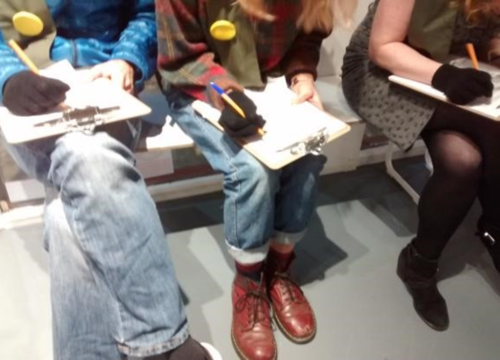 Players trying to fill in questionnaires while wearing gloves on their writing hand.

One of the challenges Carr faced early on in her D4D project was the myriad assumptions surrounding disability and video games. “First, there was the assumption that if I’m talking about games and disability, I’m going to focus on accessibility,” says Carr. “Accessibility is important, obviously, but that was not my focus. Second, it was assumed that I’m working on simulations of impairment for the sake of educating able-identified people: No, I’m not. Third, there’s the assumption that if my topic is ‘games and disability’ then I’m going to focus on therapy or games as a way to ‘help’ disabled people. That’s not what I’m doing either.”

“What disability studies literature really helps with is challenging exactly these kinds of assumptions – including that as disabled people we must need either fixing or helping. That’s a summary of what I’ve not been doing. What I have been doing is exploring able-bodies and the ableism that’s present in popular media, especially games. For me, this is a way to connect aliens, monsters and Fitbits, Victorian medical science, freak shows, horror films, eugenics discourses and zombies. From point scoring to goal achievement to ‘levelling up’, games are all about inventing assessment scenarios. They are really helpful if you want to denaturalise or ‘make strange’ the idea of assessment itself.”

“Games help explore the idea that ‘ability’ itself is the problem; that it’s slippery, conditional and temporary, it generates anxiety and depends on scapegoats. In many of the horror and science fiction games I’ve been looking at, the protagonist (and their player) are stuck on a weirdly compelling hamster-wheel, trying to be good enough, safe enough, able enough, and there are frequent depictions of places associated with assessment being defiled and destroyed – from clinics and hospitals, to schools and pharmacies”.

Exploring these ideas raised further questions about how to analyse games, given that they are played, and how different versions of a game can be generated during play. These are questions that Carr explored through her work on methods (how to analyse games) and work with players and game interpretation. For this work, Carr explains, “I joined panels at science fiction fan conferences, and I looked at different perspectives on the game Minecraft while working with a primary-school-aged player who identifies as a disabled person”.

Of course, working with a child raises ethical issues, and Carr appreciated the chance to discuss these with D4D partner Professor Mary Brydon-Miller, who works on the Ethics workstream. As Carr explains, “To try and ensure that the work was ethical, I read through and discussed some well-known ethical guidelines (e.g. BERA) with the child I was working with, point by point, but it’s still true that there are questions of power to try and address, and questions about anonymity within families and communities. Discussing this with Mary was incredibly helpful.” 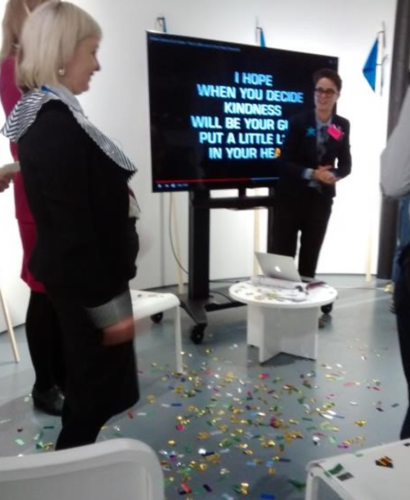 A singalong with on screen lyrics

In addition to writing about horror and bodies within games, Carr has been working closely with D4D partner Disability Arts Online to develop conceptual tools to help with understanding change in communities over time, and the potential for schism. This work exploring concepts surrounding social groups, grouping, ‘groupers’ and gate-keeping was later put to good use by DAO in their work in the Electric Bodies D4D workstream.

Carr also collaborated with D4D artist and community partner Esther Fox for a series of workshops, seminars and a theatre event. This was a chance to investigate their shared interests in old and new eugenics discourses.

As part of this work, Fox and Carr co-convened an event called ‘Troubling Legacies, Fractured Futures’, the highlight of which was a presentation from Subhadra Das, the curator of UCL’s Galton Collection. Seminar participants had a very close encounter with some evocative and disturbing objects associated with Victorian scientist Francis Galton, who established the practice of eugenics and coined the term ‘nature versus nurture’.

In a further collaboration with Fox, and building on research undertaken by Accentuate on places of historical significance to disability and community, Carr was involved with the development of a theatre-based game. This was a chance to explore playful methods of social research and demonstrate ways that live games might help with the collective and playful engagement of concepts and ideas.

“Esther and I worked with a number of contributors including game designer Rosie Poebright from Splash & Ripple, a new media and games researcher Helen Kennedy, historian Steve Poole from University of West England, and multiple actors and performers.” The game was loosely based on the Bristol-based Victorian institution called the Guild of the Brave Poor Things, which was a charity for disabled children and young people.

“We met for a series of workshops to share historical notes and materials about the Guild and its members and founders,” says Carr. “There was no intention of aiming for a historical re-enactment or an ‘educational’ experience. Instead, through discussion we explored themes, patterns and issues surrounding the Guild and the ways these might be present in our own contemporary experiences of disability. During the workshops, we discussed feelings of being included and excluded. We talked about flags, empire, disability, clubs and cults.” 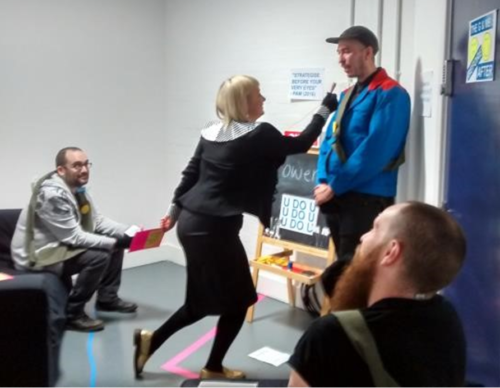 The workshops culminated in a theatre experience called ‘The Guild’ that was played at Bristol Watershed in December 2019.

“Participants were invited to take part in a series of tests to see if you could become a member of The Guild, a strange and secretive organisation apparently based on self-improvement through bossiness. In a reception area the players were split randomly into two groups, and from then on the groups faced similar assessments, but very different outcomes. One group was continually validated, while members of the other group faced longer queues, less enthusiastic hosts, and lower scores.”

“Everyone was in sight of each other and kept looking across to see what was happening to the other group. Participants gradually became aware of the double-standards playing out. As the piece developed there were more opportunities for participants to intervene and resist. Our plans to follow-up the game with a seminar event were thwarted by the pandemic, but we’re doing some writing about the experience now. The post-session interviews we collected from participants are really interesting. Without being didactic, the event prompted lively discussions around feelings, fairness and assessment, inclusion and marginalization, disability, work and welfare, cults and immigration.” 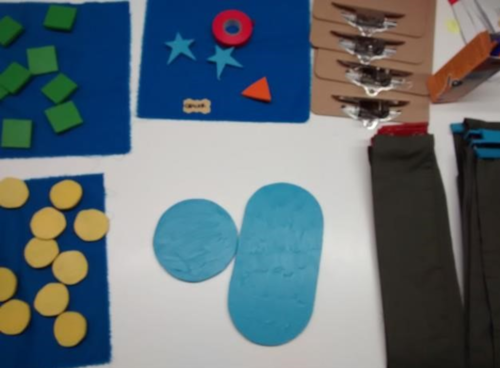 A detail of the different badges awarded to players throughout the games.

As Carr points out, the work, discussions and writing up of her research has been continuing during an extremely unsettling time for vulnerable communities. Carr reflected that, “When we were planning and developing the D4D project during 2013 and 2014, research on games using concepts from critical disability studies wasn’t really being done. Last week I went to a virtual event and there was an entire panel of game researchers using disability studies literature. That’s fantastic and hopefully, it’s no longer the case that when you say ‘games and disability’ everyone assumes you mean access or therapy or some kind of compensation. That’s something! To prepare for this same seminar, I took part in some collaborative writing that used an approach based on the surrealist drawing game, Corpse Exquisite, as a way to explore experiences of marginalisation within academic circles. This was another reminder that finding, making and working within a community can be incredibly restorative.”

D4D is an Arts and Humanities Research Council ‘Connected Communities’ funded research programme. D4D has been investigating the evolving ways in which we as disabled people express, perform, experience and practise ‘community’.