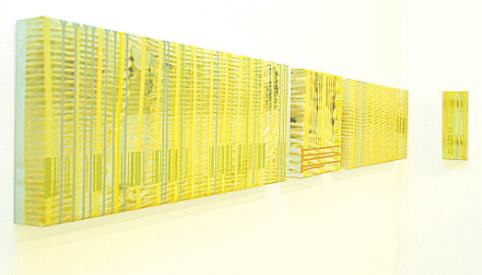 Distance Not Applicable by Esther Fox

Esther Fox is a visual artist who explores the synapses between art and science, the historical and the futuristic, the digital and the tactile. Through art and interactive play, Fox invites audiences to consider challenging complex ethical dilemmas around identity and agency. Much of her work examines the social implications of genetic screening, which is exactly what she has been exploring through her research.

Through her D4D project, Fox has created her interactive game Evolution, where audiences are asked to consider disability standpoints on eugenics and genetic screening. Through an immersive environment of Virtual Reality, Evolution asks the player to actively engage with the implications and ethics of genetic screening through a series of choices and repercussions. So what piqued Fox’s interest in the constantly evolving field of reproductive choices and genetic screening? “I’ve been looking into this for twenty years, mainly through the lens of personal experience,” says Fox. “I have a genetic condition, which has made me follow closely any new developments around how these screenings will affect individuals like me in the future.” 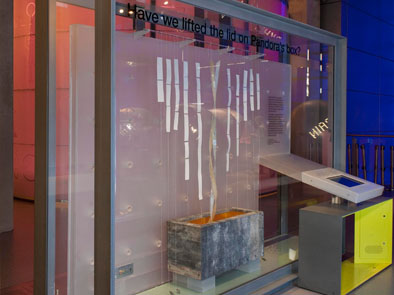 Fox continues: “I use my arts practice to explore what we think of as beauty and what we think of as flaws, and how we can allow different understandings within such tight boundaries. Initially I started making paintings based on woven structures I created. The holes and blemishes within these structures became a mechanism for exploring ideas of imperfection, which aligned with ideas on genetic screening. I moved into other mediums and created a sculptural installation for the Science Museum based on lifting the lid of Pandora’s box. It focused on the concept that once we use genetic screening we can’t go back, so what might the future look like? This got me interested in alternative technologies, like Virtual Reality and web-based Augmented Reality. Through all of my work I’m interested in reflecting on historical attitudes, how these ideals play out in contemporary life, and how they might manifest in the future.”

A perfect vessel to merge the past with the future, Fox’s VR game Evolution delves into Sir Francis Galton’s original studies of eugenics, bringing these unsettling but sadly still current ideas into a dystopic future. In case you haven’t heard of him before, Sir Francis Galton was an English Victorian polymath and a pioneer of eugenics, inventing the term in 1883. He also coined the phrase ‘nature versus nurture’. The historically shifting definition of Eugenics is slippery and complex, but a modern reading can be defined as a set of beliefs and practices that aim to improve the genetic quality of a human population, historically by excluding people and groups judged to be inferior or promoting those judged to be superior. 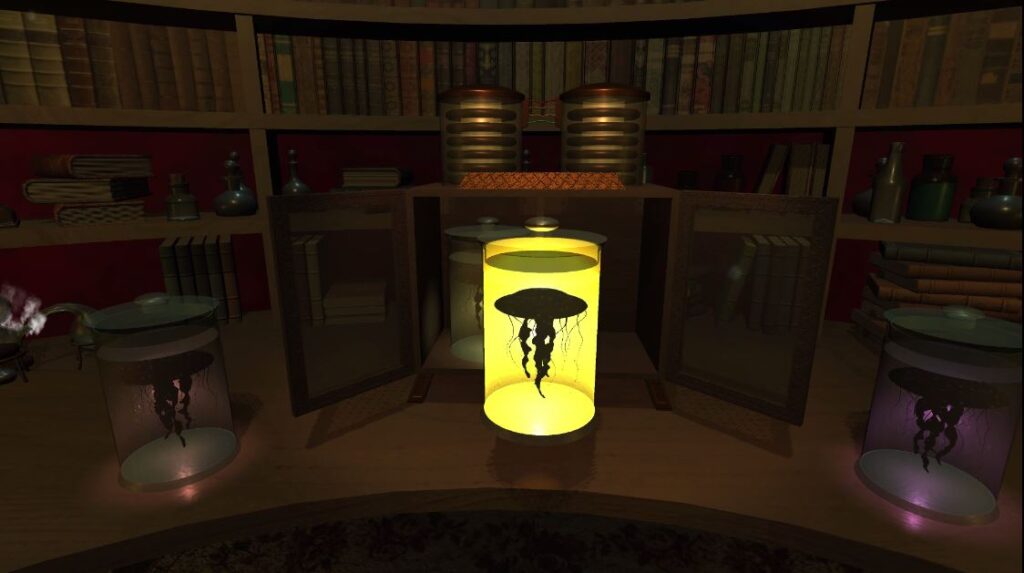 So with this simple understanding of eugenics in mind, how does the Evolution game work? As the player you find yourself in Sir Francis Galton’s study. You are asked to make a selection of two character traits for your protagonist. The four traits you can choose from are beauty, health, ability, and logic, and are based on the traditional eugenics’ ideals which a human should embody. Once you’ve chosen your two traits, you are presented with the imagined consequences of what the world would look like if humans only have those two traits. “Of course, every time you make this choice, you get a very problematic result,” states Fox. “You can’t make these sort of value choices. The idea is that you become frustrated; you realise the whole process of making these choices doesn’t work. You can change your choices, but you never get a good result.”

At this point Francis Galton’s study dissolves and you enter the second half of the game. Now you are in the Future Lab. This setting gives you a sense of how traditional eugenic logic has played out in the future of genetic screening. “You get newspaper headlines like ‘zero babies born with Down Syndrome in Iceland’. Coronavirus exists in this future, with the eugenic logic that some lives are more valuable than others. This is because in the middle of us reworking the game the pandemic occurred.” 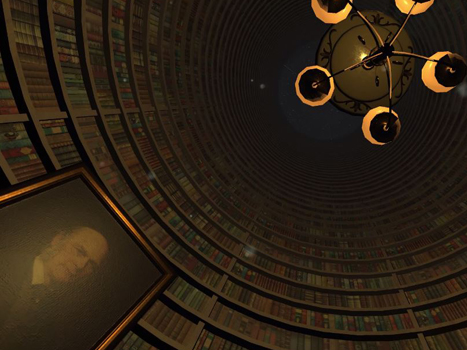 By the end of the game, the player is left with an undeniable sense of responsibility: if this is the way genetic screening plays out in the real world, the choice of how it is used in the future is down to you. “Hopefully it leaves people with a sense of needing to think deeply about genetic screening and what is currently being taken for granted as its natural scientific trajectory. I hope it will make people think about how the most prevalent voice isn’t always the correct one. That we can go back and rethink the journey we’ve gone on. That we can re-examine how eugenics has seeped into all kinds of areas of life. That we can still make some choices. We’re not completely at end of the road. We can make a change.”

The process of creating Evolution has not been a solo endeavour. During her twenty years as an artist and researcher, this is the first time Fox has engaged with participation as an artistic tool. “D4D gave me the opportunity to make my research more participatory so that it wasn’t just focussing on my perspective and interpretation. The project started from listening to other disabled people about they felt about genetic advances and issues around screening. I was interested in how to give back a sense of value to the people who have real lived experience and knowledge. This research has given a voice to more people.”

But it hasn’t all been plain sailing. Delving into complex issues around eugenics and genetic screening inevitably will unearth divisive feelings and responses, both from research participants and players of the game. “One of the biggest ethical challenges you’re dealing with when tackling a subject matter like this is that it is incredibly emotive and personal,” says Fox. “During the research period I wanted to make sure we handled it as sensitively as possible so people felt safe to share their thoughts and experiences.

Once we created a safe space, having the game as the focus really helped. It meant I wasn’t just interviewing people, we were talking about their experiences in relation to creating the game and what that might look like. This context helped them to articulate their thoughts in a way that wasn’t absolutely personal to them. I think that gave them more confidence and the space to really reflect.”

The tangible VR experience of Evolution makes manifest an insidious eugenics-bound future. But in the here and now, where does Fox envision the future of genetic screening? “I’m quite pessimistic about it. That’s why I created the Science Museum work Pandora’s box, because I think we’ve gone past the point of no return. I can’t see that there is going to be much that many of us can do to stop this trajectory of screening for conditions that medics believe are severe. We need to tackle this lack of representation of disabled people at this stage, while we’re all still here. Give it another twenty years and there might not be many of us left. Evolution is about creating a new archive of work that has a different perspective. It is crucial to show there were many of us that were not happy about the direction we’re going in. We need to preserve that narrative.”

In any contemporary debate surrounding marginalised groups and identity, the typical liberal viewpoint is that the people with personal lived experience of that identity are the experts on the subject; they should be listened to and taken seriously. However, when it comes to disabled people as a marginalised group, we are the last voice to be considered.

In genetic screening, primarily able-bodied doctors and scientists are making hugely impactful decisions without consulting with the very people who live with these genetic conditions that they are trying to erase. “As disabled people, not only we are we the last group considered, but sadly eugenic logic permeates everything,” states Fox. “That’s where disability is different to other marginalised groups. I think most people would agree that eugenic logic in terms of race is absolutely unacceptable. But suddenly it is okay if it’s about disability, because it will be doing a ‘greater good’.”

Fox adds, “What is so problematic about eugenic logic is that it passes itself off as something positive, to eliminate suffering for the good of the mother, or not bringing a child into the world who is going to struggle. When disability is only seen from the medical perspective, that eugenic logic holds up. But if you start to attack that logic from a lived experience, you can see that this case should not be being argued. That is what is difficult when we talk about disability and impairment, because it always sits within that field of eugenic logic.”

The game in it’s fully finished form will be available soon to download as an app as well as VR experience – so watch this space for further news. A short demo film about Evolution is available on Youtube